Tilt series pre-processing in Warp will allow you to reach higher resolution for your sub-tomogram averages. However, unlike the pipeline for 2D data, the tilt series pipeline still has a few gaps. You will have to switch to IMOD to perform the initial tilt series alignment (using patch tracking or gold fiducials). There is also no BoxNet-enabled on-the-fly particle picking yet, and you will have to use a rather slow template matching routine in offline mode. Metadata import is supported only for SerialEM currently. We intend to address these shortcomings in the near future.

We will use data from EMPIAR-10164 in the screenshots below – in particular, the 5 tomograms used in Turonova et al. 2017.

The first step towards tilt series pre-processing in Warp is pre-processing the individual tilt movies in 2D mode. If you’re not familiar with that procedure or Warp’s basic interface features yet, please follow the 2D quick start guide. Here are some important differences to traditional 2D movie processing for this step:

The motion model shouldn’t have spatial resolution, as there is usually not enough signal in a single tilt movie average for such fine alignment. Thus, the grid resolution will be 1x1xN. A good value for N is the number of frames in the shortest movie in case you’re using a collection scheme that increases the dose (and thus the movie duration) at higher tilts. If you’re fractionating the dose in very fine steps and collecting with a small pixel size, N can be lower than the frame count to avoid overfitting.

If you already processed the data with a different pipeline and don’t want to repeat the tilt series alignments because the raw 2D movie alignments would change (e. g. compared to MotionCor2), you can also reuse those pre-aligned averages. Just pre-process them instead of the movies. Obviously, the movement processing can be turned off. Warp will estimate the CTF and generate averages, which are an exact copy of the input images. This will feel very redundant, but the pipeline was written with movies in mind and doesn’t have a special case for single-frame images.

The CTF can usually be estimated well with a 2x2x1 defocus grid. You can use these estimates to monitor data collection. However, the values will be re-estimated later during tilt series pre-processing using a more robust model. Because of the low amount of signal per tilt movie, it might help to check Use Movie Sum.

Particle positions obtained with BoxNet won’t be considered later. However, the masks will be. In tilt series mode, those are assumed to cover gold beads and other high-contrast artifacts, and will be used to fill image areas with uncorrelated noise. You can quickly retrain BoxNet to mask out gold beads and not pick any particles. We would like to offer a pre-trained model for this purpose, but currently lack the training data. If you think such a model would be useful, please consider contributing training data! 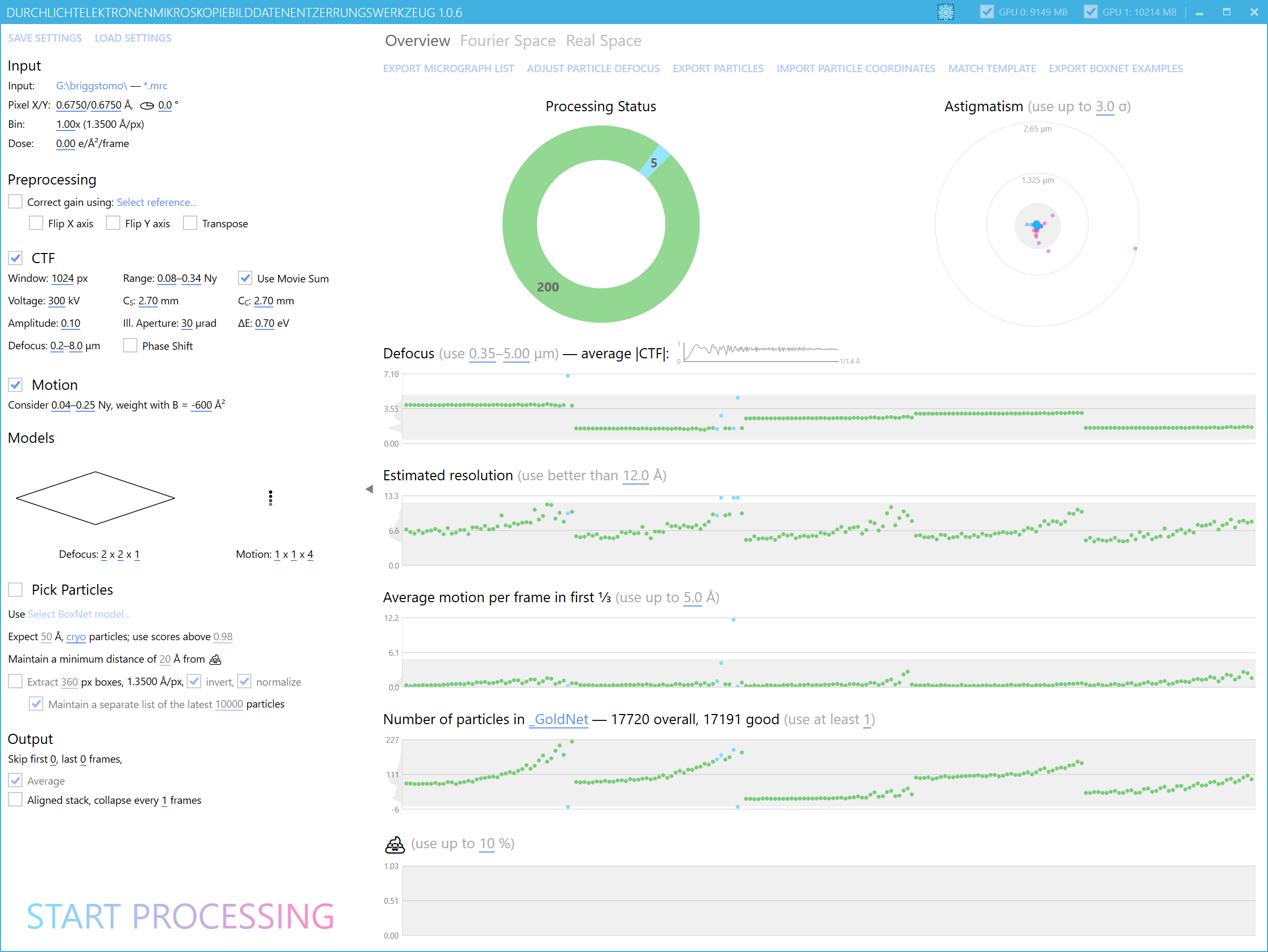 IMOD’s etomo requires each tilt series to be assembled in a single MRC stack. You can use Warp to combine the previously generated tilt movie averages into such stacks. 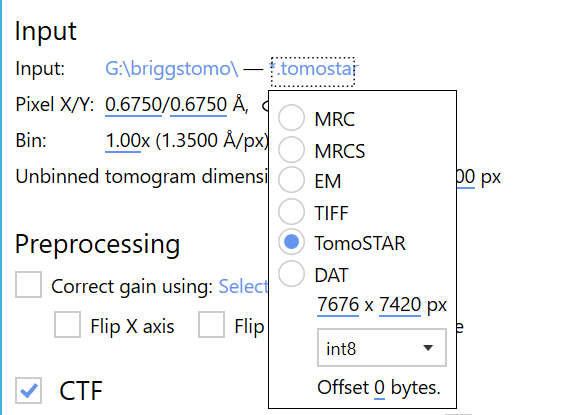 Once in tilt series mode, the Overview tab will contain the Import tilt series from IMOD button. Click it to bring up the task dialog. Specify the folders containing the mdoc files generated by SerialEM, and the original tilt movies. If there are multiple mdoc files per tilt series (e. g. “plus” and “minus” after bi-directional collection), you can specify several suffixes. Once these settings are set, all tilt series should appear with the correct number of tilts in the list on the right. Individual series can be deselected using the checkboxes next to their names. Click the Create stacks for IMOD button to generate the stacks. This will create an imod folder in the current project directory, and place each stack in a sub-folder named after the respective tilt series. You can now execute etomo in each of these folders to perform alignments. Please note that it isn’t necessary to generate an aligned stack or reconstruct tomograms in etomo, other than for diagnostic purposes. You can use manual deselection in Warp’s 2D pre-processing mode to remove individual tilt images from the stack. Please remember to reflect these changes when setting up the project in etomo.

You can also generate TomoSTAR files without any alignments at this point by clicking the Import button. Please refer to the next section for information on how to specify the electron dose. 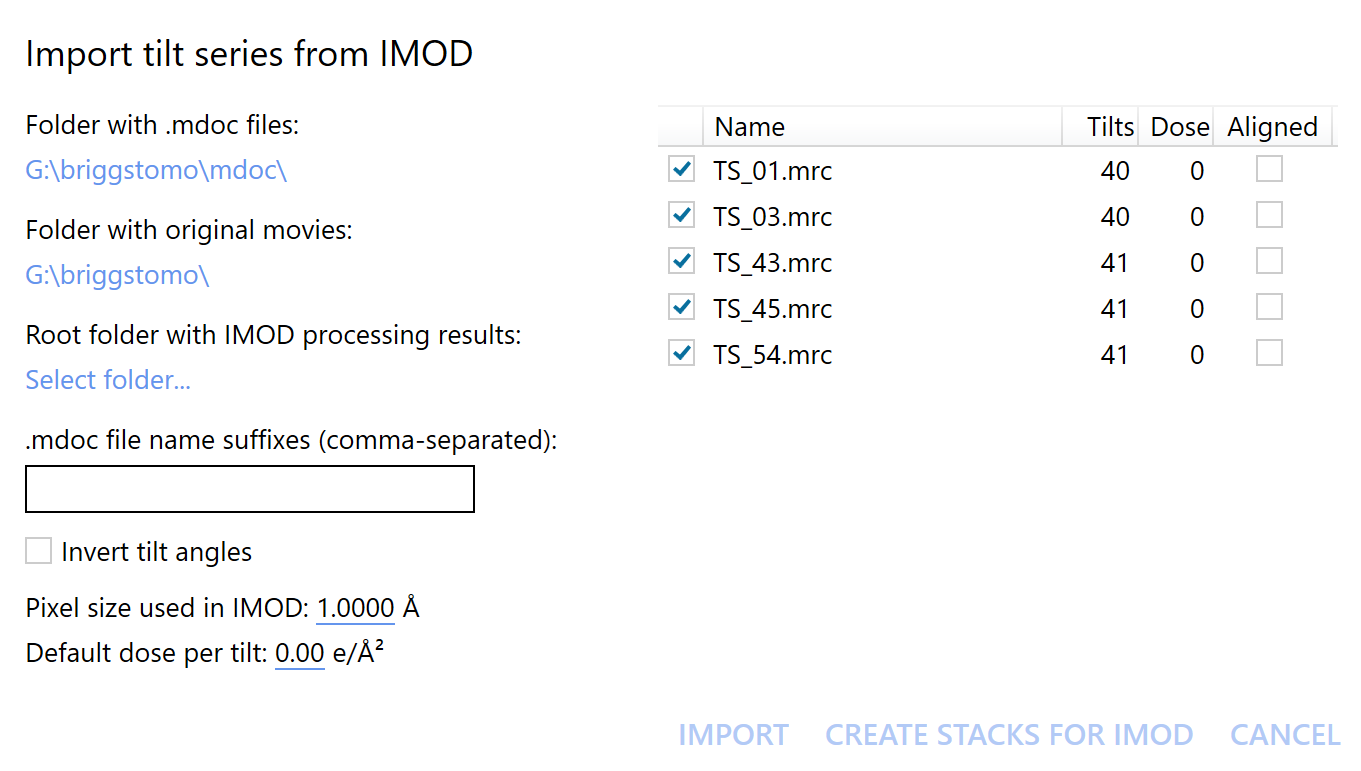 If you closed the Import tilt series from IMOD dialog from the previous section, open it again. Specify the mdoc and original tilt movie folders, and the suffixes (if applicable) as before. For the Root folder with IMOD processing results, select the imod subfolder created previously. If you didn’t use Warp to set up the folder structure as suggested in the previous section, make sure the alignment results are located in [project folder]/imod/[tilt series name]/. Warp will try to find the xf and taSolution.log files there. Please note that IMOD’s pre-tilt correction (“Tomogram positioning” tab in etomo) is currently not supported and shouldn’t be used if you want the results to match between IMOD and Warp. If everything has been parsed correctly, the Aligned checkboxes should become checked.

SUPER IMPORTANT HANDEDNESS NOTE:
Warp has a different convention for tilt angles and handedness compared to IMOD. By default, the tilt angles will be multiplied by -1 upon import to match IMOD’s 3D reconstruction handedness. You can turn off this behavior by checking Don’t invert tilt angles. Now that the map handedness is correct, there is still the defocus handedness to take care of. Although SerialEM is usually calibrated to produce the correct map handedness in IMOD’s 3D reconstructions, the defocus convention has about a 50:50 chance of being wrong across labs in our experience. Processing data with the wrong handedness calibration will limit the resolution achievable for your sub-tomogram averages. That would be a real pity! Luckily, Warp includes an easy way to check if the calibration is wrong: Estimate the CTF for the raw tilt movies with a 2×2 spatial resolution, then initialize and import the tilt series as described in this guide, estimate the CTF for the entire tilt series, and click Check tilt handedness in the Fourier Space tab. A dialog will appear to tell you the result and its certainty. -1 means certainly wrong, +1 means certainly correct. Values closer to 0 may arise because the raw tilt movie CTF estimates were off due to weak signal. If the value is too close to 0, you may want to try several tilt series and average the result to be sure. If it turns out your defocus handedness is wrong, Warp will offer you to flip the angles used for defocus calculation. This will change the AreAnglesInverted field in the tilt series XML metadata. It is best to do this check and possible flipping before you process the data any further.

Specify the same Pixel size you used in IMOD. Warp will use it to convert the shifts to Ångström. For the electron dose, there are two options: SerialEM, when calibrated accordingly, can store the dose values in the original mdoc files. If the calibration is off or hasn’t been done at all, you can specify a non-zero value in the Default dose per tilt field. There is currently no option to conveniently specify varying dose values. In case of dose-symmetric collection, it is usually OK to just use the per-tilt dose of the very first tilt images for all tilts, since the higher tilts won’t contribute much information to high-resolution 3D averages anyway. If you absolutely need to specify varying dose values, you will have to edit the wrpDose column in the TomoSTAR files later.

That’s it! Click Import to create the files and start processing them in Warp. 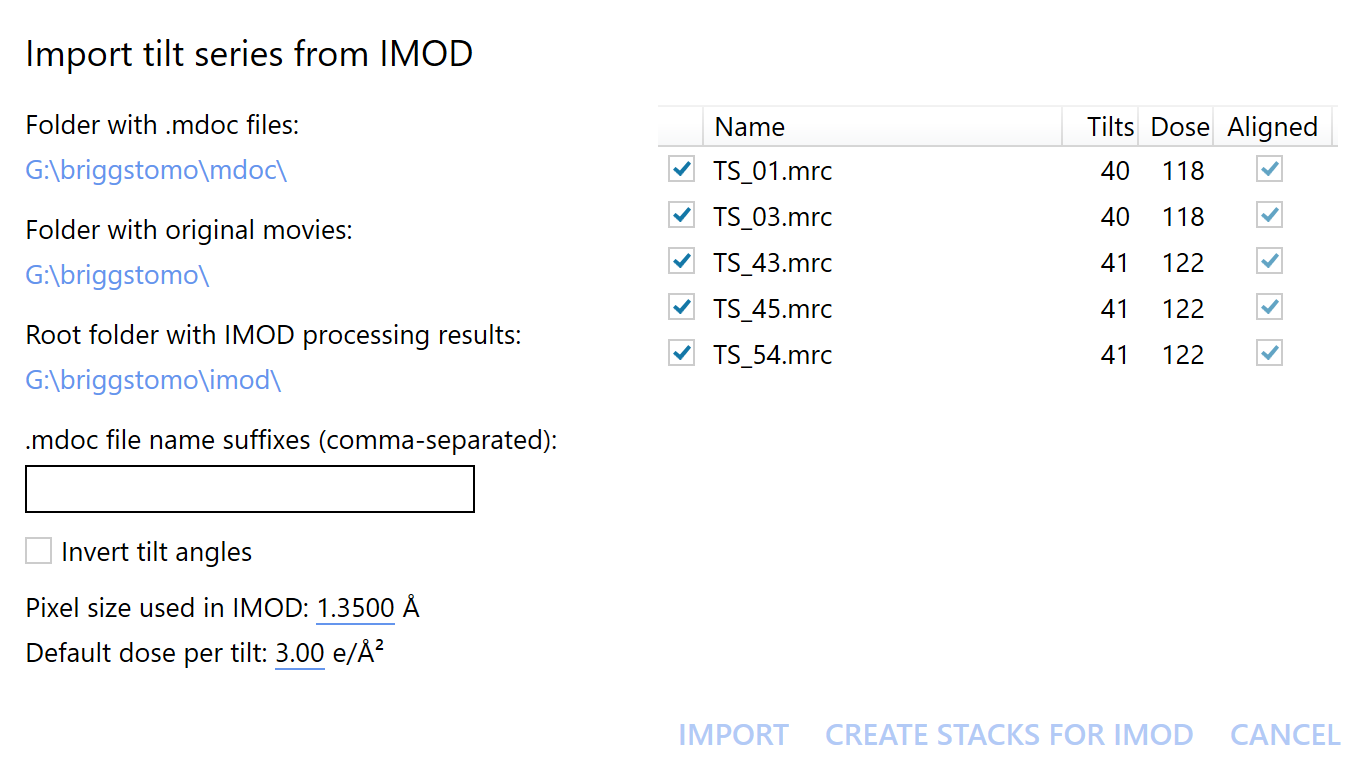 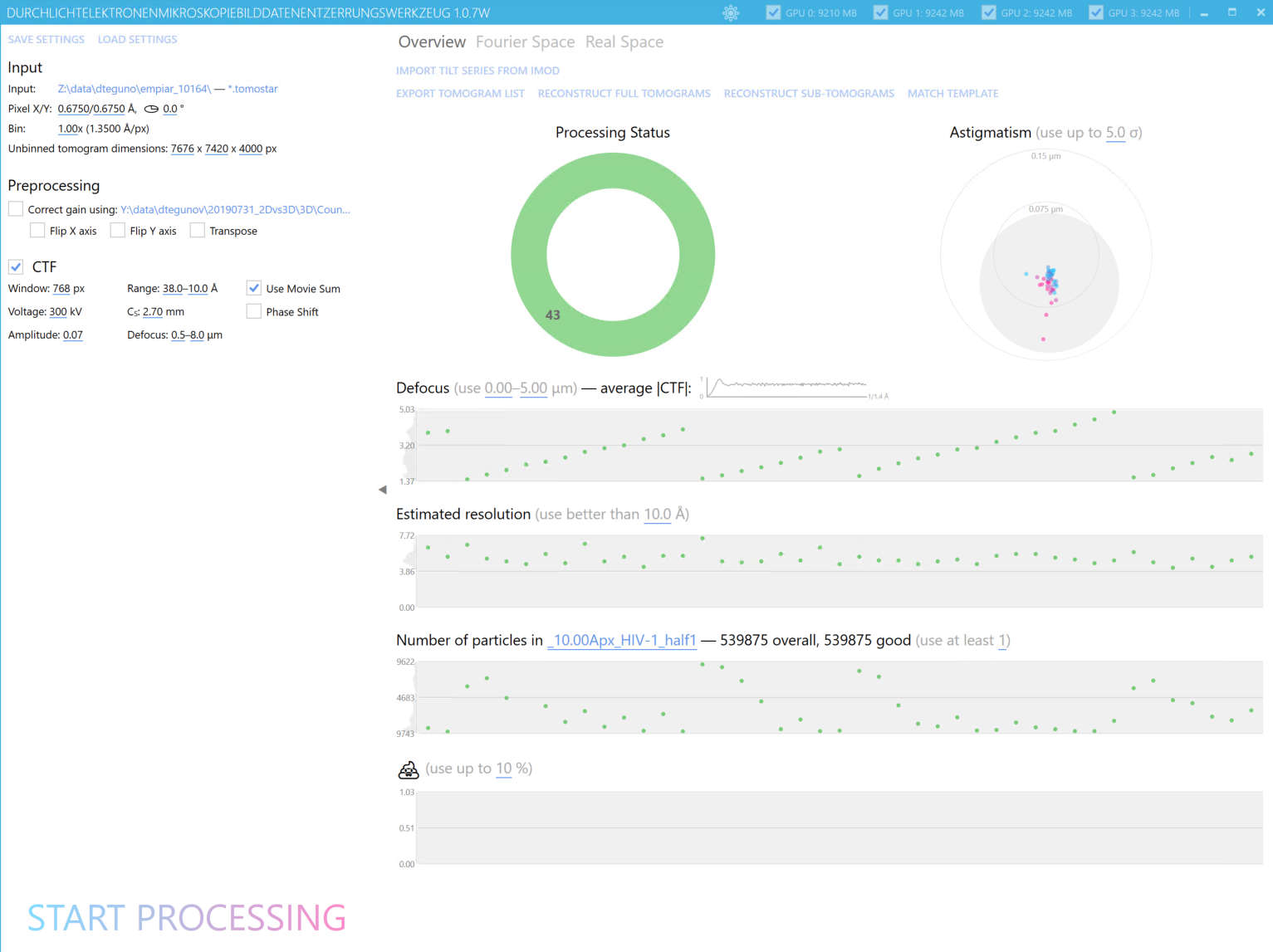 You will notice the Input section gained a new parameter: Unbinned tomogram dimensions. The X and Y dimensions are usually similar to the input image size. Note that for non-square sensors like the K3 the dimensions should reflect the sensor shape if you don’t want to lose data. However, the tomographic volume and raw image coordinate systems are related to each other through the tilt axis angle. Often, the tilt axis is close to the X axis in the raw images, while in the tomogram it is always asumed to be aligned with the Y axis. Thus, if the raw image dimensions are 6000×4000 and the tilt axis angle is around 90° or 270°, the tomogram dimensions should be 4000×6000. The Z dimension depends on the sample thickness. You might have to do a few test reconstructions (in Warp or IMOD) to figure out the right value. Ideally, the tomogram should be thicker than the sample to allow for artifact-free template matching at its borders. Choose these dimensions wisely: Once things like particle positions have been established, changing the dimensions will invalidate those positions and will need to either adjust the values by hand or start from scratch.

The Bin parameter has a somewhat different use in Warp compared to IMOD. First, it is defined as an exponent, i. e. downsampling factor = 2binning (the UI will tell you the result), while in IMOD it is directly the downsampling factor. Second, there are multiple places where binning can be set. The value defined in the Input section will be used when loading the data, i. e. this is the maximum resolution any subsequent operations on the data will be able to use. However, task dialogs like Tomogram reconstruction or Sub-tomogram export allow to set their own target pixel size, which will bin the data additionally if it is larger (and it can’t be smaller) than the initial binned pixel size. Thus, you should only set the initial Bin parameter if you know that you will never need to go to a lower pixel size – for example, if you start with super-resolution data that need to be binned once to get to the physical pixel size. Changing this value later will invalidate every already pre-processed item.

The only pre-processing operation implemented for tilt series at the moment is CTF estimation. Warp will estimate the defocus and astigmatism for the entire tilt series while taking the tilt angles as constraints into account. The settings are the same as in the 2D case, except for a lack of model resolution. Since all the information about the Z position of objects in the tomogram will come from the tomogram itself, only a global defocus offset is needed for each tilt. Additionally, because the sample rarely lies flat in the focal plane, a global pre-tilt orientation is fitted for the entire tilt series.

Once all items have been pre-processed, the quality filters work the same way they do in 2D mode. There is currently no real space view implemented for tilt series data – the Fourier space tab is the only place where you will find useful per-item information.